Love is in the air, and so is another movie guide! With the ongoing pandemic putting a damper on social plans, many couples will be opting to celebrate Valentine’s Day at home cuddled up with a romantic movie. Unsure of what to watch? Below we have a guide on where to watch the top 10 most popular “romance” films, as rated by IMDb users. Did your favorite make the list? Let us know what you think in the comments below. Be sure to enter our Valentine’s Day Giveaway below for a chance to make your night extra special.

*If Showtime , EPIX, or STARZ is a part of your Fioptics TV package, login to their apps using your Cincinnati Bell My Account credentials. Check out all available Fioptics channels here.

Valentine or no valentine, it's always acceptable to binge-watch movies while the weather is unpredictable and cold.  Grab your valentine, galentine, or pet and enjoy some quality entertainment with Fioptics TV.  Need to add or upgrade your TV package with Cincinnati Bell? Interested in HBO Max?  Shop here or call 513-566-4101. 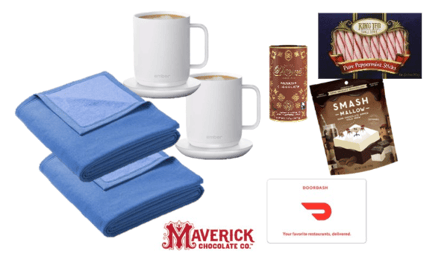 Plus, enter our Valentine's Day Giveaway for a chance to win all the prizes above, valued at over $400. Spend Valentine's Day at home this year while sharing a mug full of hot chocolate, indulging on Maverick Chocolate, and enjoying DoorDash deliveries galore!