Fall in Line with Fiber

Fiber. Until recently, we used to only hear about fiber as something you’re supposed to eat as part of a balanced diet. But in today’s data-hungry world, when someone mentions “fiber”, they’re most likely talking about Fiber technology.

Fiber optic technology is the future of communications. When we talk about “fiber,” we are talking about strands of glass or plastic smaller than a human hair across which data can be transmitted through light waves. Each individual fiber strand of fiber is capable of transferring thousands of phone calls and emails simultaneously. Bundle them together into a fiber cable and that capacity skyrockets into the millions. Considering the traditional copper cables found in most homes and neighborhoods are only capable of providing a fraction of this bandwidth, it’s not hard to see why everyone is clamoring for fiber. 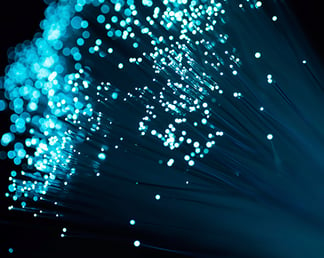 Fiber Optic technology was first developed for doctors in the 1950s. The goal was to create a pipe of some sort that would allow doctors to see the inside of a human body without having to make any sort of incision. Nearly a decade after fiber optics was used in endoscopes, the same technology was used to transmit phone calls faster than ever before.

Today, over half a century later, fiber technology is being used to deliver the fastest, most seamless connections imaginable. Not only can fiber be used to transmit emails and phone calls, but it can also be used for lightning speed, buffer-less streaming as well. That means consumers can use it to stream all the movies, shows, music, games, and entertainment their hearts could ever desire.

On a larger scale, businesses and organizations can use fiber to send information at the speed of light. For example, if two hospitals are on a fiber network, they can send each other important information about a patient or condition without any delay, which could make a huge difference in treatment.

As I’m sure you’ve collected at this point, fiber is awesome. It’s important. It’s the future. Cincinnati Bell agrees, which is why we have already invested over $800 million to build out our fiber network throughout the greater Cincinnati area. Fiber in the form of our Fioptics service is now available to approximately 70 percent of the area and hundreds of thousands of consumers and businesses. And we’re not done. Cincinnati Bell plans to continue the expansion of our fiber network over the next several years, so if you don’t have fiber available yet, we’re working hard to bring it to you. See if your home or buisness qualifies for Fioptics today!

Check out how Fioptics has made a substantial and imparitive difference to buisnesses, families, and community members throughout various organizations around the city.


Tell us your fiber story. If you have fiber, how has it changed your life?