Halloween 2018 - Guide to Everything on TV 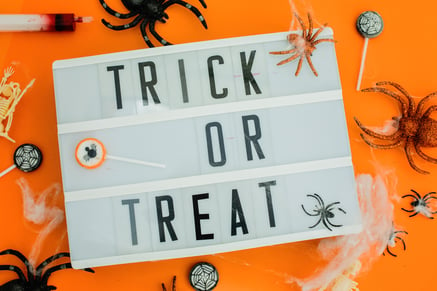 October is finally here and there is no better way to kick off the fall spirit than by putting on a sweater, grabbing your favorite candy and having a Halloween movie marathon.

Luckily for you, we’ve put together a comprehensive list of when and where to find all your favorite Halloween chills and thrills.

The Goonies – The Goonies set about on an adventure of every kid’s dream: to find a hidden treasure. When they run into the Fratellis, the neighborhood criminals, they get more than they bargained for.

Hocus Pocus -  The Sanderson sisters are up to their tricks and it’s up to Max and his friend (although he wishes it was more) to save his little sister Dani from Salem’s most mischievous witches.

Disney Channel’s Monstober:
Get ready for some family friendly spooky Halloween fun with the return of Monstober! Tune in to catch Halloween themed episodes of Disney channel series which includes Raven’s Home, Big Hero 6 The Series and Bizaardvark. This year’s lineup also includes fan-favorite movies throughout the month including Halloweentown and Twitches.

Plus, treat yourself to free Disney Halloween Programming On Demand, including Monsters University, Hocus Pocus, and The Haunted Mansion. 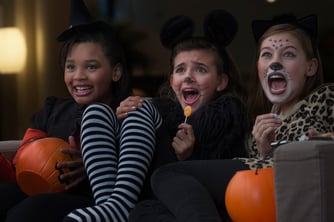 Halloween Wars:
Six teams of cake masters, sugar artists and amazing pumpkin carvers will compete to prove they are the best in the ultimate Halloween baking competition. Bring your appetite because the cold night of Halloween is about to get heated up.
Sundays nights at 9pm on Food Network, Fioptics channel 562 HD / 62 SD

Halloween Craziest:
This special features the most terrifying, extreme and absolute best of what Halloween has to offer. From America’s scariest, haunted house in San Diego to British Columbia’s pumpkin drop celebration, each destination is more frightening and fun than the last.
Travel Channel, Fioptics channel 559 HD / 59 SD

AMC’s FearFest:
This year’s Fearfest will feature classics from franchises like Scream and Friday the 13th, as well as individual terrifying flicks including Carrie and Annabelle. A huge focus of FearFest this year is arguably the most iconic horror movie franchise in history, Halloween. Catch Michael Myers return to Haddonfield,  as his stories will be shown throughout the event. This year’s Fearfest will feature more than 60 films running from mid-October through  Halloween Night.
Fioptics channel 538 HD / 38 SD

SyFy’s 31 Days of Halloween:
All October, SyFy is bringing you the scariest, creepiest, and most ghoulish programming to get you in the Halloween Spirit. This year’s event has content like Dead in the Water as well as Hollywood horror films including Jeepers Creepers, Insidious and The Purge.
SyFy, Fioptics channel 538 HD / 34 SD

TCM’s Classic Horror Marathon:
Celebrate some of the most iconic films from the ‘30s to the ‘60s, with films like The Mummy, House of Wax and The Haunting. It’s been 200 years since Mary Wollstonecraft Shelley created her novel Frankenstein in 1818 and TMC is celebrating! TMC will honor the terror that the monster has unleashed for several generations with all of the Frankenstein films starting with Son of Frankenstein (1939) to the premiere of The Frankenstein Myth (2018).
Tuesdays in October, Fioptics Channel 534 HD / 34 SD

You don’t want to miss these great Halloween Videos On Demand from Cincinnati Bell, including

Now Playing On Demand – For Purchase: