Proud to be your Neighbor: Cincinnati Bell 2018 Super Bowl Commercial

Cincinnati has been a place to call home since 1788. The land was originally called Losantiville until 1790 when Arthur St. Clair, the first governor of the Northwest Territory, renamed the land. Now, we have been calling Cincinnati home for nearly two hundred and thirty years.

Cincinnati Bell has been connecting the Greater Cincinnati community to one another and the rest of the world since 1873. We are proud to be your hometown provider and your neighbor. That’s why we were excited to premiere our latest commercial during halftime of Super Bowl 52.

Over the past two centuries, Cincinnati has developed its own identity. Our goal with this commercial was to show our love for Cincinnati and the surrounding neighborhoods by highlighting some awesome landmarks that give Cincinnati its unique character alongside Cincinnati Bell employees who live in those places – your very own neighbors.

The commercial features 20 employees and locations all around the Greater Cincinnati region. These landmarks all contribute to the rich and unique history of our beloved home. So, here is a little background on why each landmark is so special:

Lunken Airport – This airport served as THE airport in Cincinnati from 1925 until CVG opened in 1944. At the time it opened in 1925, Lunken was the largest municipal airport in the world, and is currently home to the nation’s oldest standing control tower (seen in our commercial!). Currently, the airport serves many commercial airlines as well as private charters, in addition to being an awesome place to go spend the day with family or friends at the park and picnic grounds.

The “Painted Ladies” of Columbia Tusculum – Columbia Tusculum is the oldest neighborhood in Cincinnati, established in 1788, a month before Losantiville was even settled. The first school in Cincinnati opened here in 1790, and the oldest standing house was built in 1804. Make your way down Tusculum Avenue and take in all the “Painted Ladies”, the brightly painted Victorian homes (featured in the commercial!).

Krohn Conservatory – Named after Irwin M. Krohn who served on the Board of Park Commissioners from 1912-1948, the Krohn Conservatory has been bringing life and learning to the people of all ages in Cincinnati since 1933. Filled with over 3,500 exotic plant species from all over the world, this beautiful place is also home to a spectacular rain forest waterfall and the annual Butterfly show, where hundreds of butterflies are released to fly free throughout the space.

Music Hall – The original idea for Music Hall came from Reuben R. Springer, a businessman and community leader, who became annoyed after the musical performance he was attending has to be delayed when the thunderstorm became too loud on the roof of the building. After Cincinnatians raised $225,000 and Springer donated $175,000, Music Hall was built. The central portion was completed in 1878, and the two side wings were completed in 1879.

Florence Y’all Water Tower – Built in 1974, the water tower was built next where the Florence Mall was being constructed. The tower originally read “Florence Mall”, but the Highway Beautification Act of 1965 had regulations against advertising a nonexistent entity. So with no budget and the risk of fines looming, Mayor C.M. “Hop” Ewing came up with the design on a napkin during breakfast at a truck stop diner, scratching out the legs of the “M” and adding an apostrophe. So, for almost no money, the tower was saved and a landmark was born.

Newport World Peace Bell – Weighing a mere 66,000 pounds, the World Peace Bell is the largest, free-swinging bell in the whole world. It rings every day at noon, signaling the need for peace. The bell was supposed to stand guard to the Freedom Tower that was never built, although there are still steel pylons underneath the adjacent parking lot.

American Sign Museum – Say hello to the largest public sign museum in America! Step into a time capsule and take a walk through the past in one of the brightest ways possible. Founder Tod Swormstedt spent his career working with literature about signs. During what he called his “mid- life crisis project”, Tod created the organization that is now home to hundreds of signs, including a full original McDonalds sign.

Jungle Jim’s International Market – Anyone who has been to Jungle Jim’s knows how truly incredible of an experience it is. The founder, Jungle Jim himself, started his business endeavors with a “garage sale on wheels” out of a milk truck made before he was born, and ended up creating one of the most unique shopping experiences imaginable. How many stores have you been to where the outside of the bathroom looks like a port-o-potty?

Northside – Originally known as Cumminsville, the town became known as the place where “Cincinnatians could get away from the city”, and was either thought of as a “Happy Valley or Hell Town.” In the census of 1870, 48% of the residents of Cumminsville listed their nationality as German, as immigrants were coming to America in search of America’s promise. The area became known as the Northside during the period following World War II.

OTR Vine Street – Holtman’s, and Bakersfield, and The Eagle, oh my! OTR Vine Street is without a doubt one of the most delicious streets in Cincinnati. Packed with an assortment of eclectic and unique bars and restaurants, there is something for everyone (personally you’re most likely to find me at Holtman’s). Even more unique than the food, though, is the history of Over the Rhine and its comeback kid story.

Homecoming Mural – The Homecoming, or Blue Birds, mural is based on a painting done by celebrated Cincinnati artist Charley Harper. The mural is done in the “minimal realism” style and depicts two bluebirds, a male and female, returning home. This mural is one of the many amazing ArtWorks murals around the City, and looks over East Court Street.

Xavier University – The first Catholic institution of higher learning in Ohio and the Northwest Territory, Xavier University was founded as an all-boys school back in 1831. The first tuition rates in 1840 were $40 per year for day students in the Classical course, and $24 per year for the Mercantile program. XU became fully co-ed in 1969, and is now home to 4,563 students and one of the top basketball teams in the nation.

University of Cincinnati – Formally established by the city of Cincinnati in 1870, and previously Cincinnati College and Medical College of Ohio, UC is the now an official Research University and ranked as one of America’s top 25 public research universities. In 1906, UC became home to the world’s first cooperative education program. UC is now the 18th largest university in the nation, home to over 45,300 students and one of the top basketball teams in the nation.

Cincinnati Art Museum – During the 1870’s when art museums were still new, the Women’s Art Museum was tasked with “bringing such an (art) institution to the region for the benefit of all citizens”. By 1881 the Cincinnati Art Museum Association was established, and five years later the CAM opened. The museum was considered worldwide as “the Art Palace of the West.” Currently, 136 years later, the museum has a collection of over 100,000 items spanning 6,000 years of history.

Incline Public House – Cincinnati used to be home to five inclines that served as a basis for rail-based transportation to and from the city, with the Price Hill incline being the steepest. Shortly after the incline became operational in 1874, the “Price Hill House” restaurant opened and remained open until the 1930’s. In 2013, the Incline Public house opened in the same spot, treating guests to outstanding food and views.

Western Bowl – The 68 lane Western Bowl in Green Township was run for 40 years by the Hoinke family, particularly by Erwin “Erv” Hoinke Jr. Erv was an avid bowler and used to say “he bowled his way out the Korean War”, when he was called back home from serving to compete in a competition and was not asked to return overseas. Erv established one of the most popular amateur bowling competitions in the nation, the Hoinke Classic, which saw over 55,000 individual registrations in the early ‘80s.

Loveland Castle – During the 1920’s, the Cincinnati Enquirer ran a promotion to improve its subscription base. If you paid for a full year’s subscription, the Enquirer gave you a plot of camping land along the Little Miami in Loveland. Harry Delos Andrews paid for 11 subscriptions and therefore received 11 plots, on which he built the Castle and furthermore established the Knights of the Golden Trail, men who believed in the medieval ideals of knights, behavior, and history.

Fort Thomas Tower – The 102 foot high tower has stands in welcome at the entrance of Tower Park in Fort Thomas. The tower houses a standpipe capable of holding 100,000 gallons of water, as this pipe was originally the only way to get water into the military base. The tower cost $10,995 to build in 1890 and not only serves a functional purpose, but is also a monument to the Sixth Regiment of the U.S. Infantry who died during the during the Spanish-American War.

Cincinnati Bell Corporate Headquarters - Originally a provider of telegraph services, the company became a member of the Bell System in the late 19th century. In 1931, the company opened its building at Seventh and Elm streets, the "Telephone Building" in the public's mind, which also housed the world's longest straight switchboard, with 88 operator positions. Cincinnati Bell’s corporate headquarters currently resides downtown in the Atrium II building on E. Fourth Street, overlooking Great American Ballpark and the river.

Cincinnati and the Greater Cincinnati region is full of rich and interesting history – and even more amazing people. Giving back and showing love for the community is one of the highest values at Cincinnati Bell, and it is our honor to serve our friends and neighbors and connect what really matters. 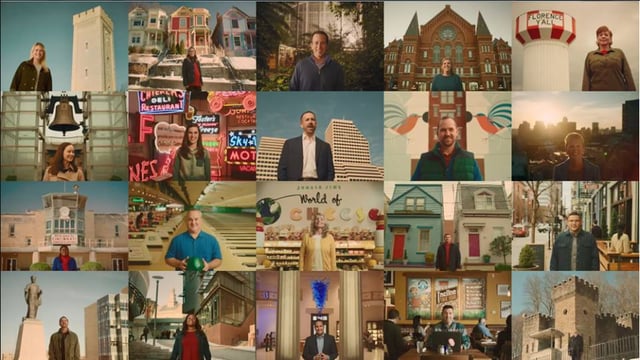